Alfonso "Piloto" Nieves Ruiz is a self-taught artist who was born in Querétaro, México. When Piloto was ten, he moved from his impoverished barrio to the outskirts of the city and witnessed how the mass urbanization of Mexico was swallowing the small pueblos that surrounded its cities. Piloto's new neighborhood was between an industrial zone, an electric plant and a clandestine garbage dump where he loved to play with stuff he found, unleashing his imagination. A river that passed a block from his home came from a "presa", a small lake, a few miles away in the wealthy neighborhood of Juriquilla. The well-to-do residents used the water for entertainment; they put sand on the side of the lake to simulate a beach and water skied and jetskied all the time. These rich people controlled the water that was coming from that presa into the river that the small towns use for farming and daily living. As the river got close to the factories we could see how the river changed color with the big industries illegally dumping chemical waste into the river. Often Piloto's neighborhood didn't have running water and so the residents were forced to conserve and recycle this vital resource.

Piloto moved to Chicago at the age of 21. Although he made art throughout his childhood and youth, it was when he turned 24 that he started to dedicate his time to the world of art. He walked the alleys of Chicago and found out that here in his new home, people were very wasteful. People washed cars with hoses, kids played in hydrants, people  let the water run while brushing their teeth and washing the dishes. Food was thrown away and TVs, couches, and many useful things piled in the alleys. He saw himself trying to reach the American dream yet was paid 5 dollars an hour and hid behind boxes to eat his lunch because his employer wouldn't give him a lunch break. His only escape from the exploitation, discrimination, inability to communicate and separation from his loved ones and country was art. Feeling the clay on his hands connected him to his childhood, to the river, to the dump, to the hungry factories, to the hungry people, to the poor rich people, to his roots, to the earth, to the water, to the mud.

He has displayed his art in many venues, including the National Museum of Mexican Art, the lawn of the Field Museum, Navy Pier, 33 Contemporary Gallery, Garfield Park Conservatory, CU Museum of Natural History and the Boulder Public Library.

Alfonso "Piloto" Nieves is perhaps best known for his work with the community. He has given art workshops focused on immigration, social justice and ecology at Casa Guanajuato, Casa Aztlán, Yollocalli, UIC, University of Colorado Museum of Natural History, as well as many different community centers and schools around the city and suburbs. 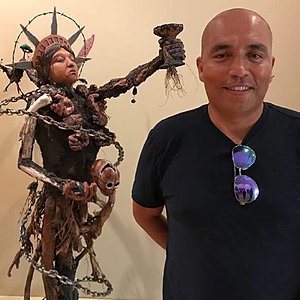 “As a self-taught artist, I am not constrained by institutional rules or limitations. For me, art is the materialization of ideas and feelings that take shape according to how each individual percieves the world.

My work deals with different issues that humanity faces and challenges the viewer to see our human condition through a raw lens.

My principal material is clay, a symbol of the earth, which is the source of everything – including us. I mix clay with garbage that I find and in this way I try to show the mental garbage and spiritual disconnect that we are exposed to every day.

My art could be labeled dark, surreal, and decadent, but out of the decadent emerges the reconstruction and regeneration. Out of the surreal, the reality in which we live. And out of the darkness emerges the light, which is what we are.