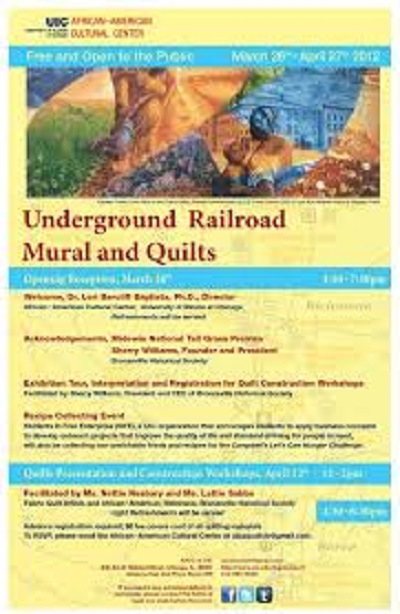 From Africa to the Cotton Fields Heading link

From Africa to the cotton fields of the South to freedom in the North , artist Kathleen Farrell’s brushstrokes tell a remarkable story of strength. Mrs. Farrell captured the freedom seekers perils through Illinois in this breathtaking mural. The artwork was commissioned by the U.S. Forest Service in 2002. Bronzeville Historical Society is committed to introducing the mural to new audiences.

The black trunk was donated by Mrs. Doris Davis. It was brought to Chicago in 1942 from Mississippi by her ancestors, and it held quilts named by elder family members. The patchwork was handmade by Mrs. Marry Robinson in Chicago during the 1940’s. It served as a mechanism for keeping warm through the rigorous winters of Chicago.

This colorful quilt was created by Mrs. Lula Scott circa 2009. She was taught how to crochet by her mother in Arkansas, solely using yarn scraps to create this work of art. It is a great example of fabricating artistically through the use of discarded material.

The Potbelly Stove, donated by Mr. Henry Doss, was used for keeping warm, cooking meals, and heating irons for pressing clothes. The Maytag Wringer Washer was used to clean tattered clothing that would later be used for making heritage quilts.

Doris Davis Captured photographs of abolitionists in order to pay homage to those who aided the freedom-seekers in Chicago. Each individual whose photo appears on the quilt either aided escaped slaves or were themselves runaway slaves. This canvas was created in 2009.

These representational Code Quilts are significant because within the fabrication lies various codes and symbols which helped enslaved Africans navigate to safe havens via the Underground Railroad. These two quilts were commissioned by the National Park Service in 2002.