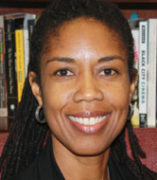 Her first book, I've Got to Make My Livin': Black Women's Sex Work in Turn-Of-The-Century Chicago, explores African American women's sex work in Chicago during the decades some of the city's most explosive growth, expanding not just our view of prostitution, but also

of black women’s labor, the Great Migration, black and white reform movements, the emergence of modern sexuality, and the criminalization of Black women in the early twentieth century city.  The book won the Lora Romero Book Prize awarded by the American Studies Association to the best-published first book in American Studies that highlights the intersections of race with gender, class, sexuality and/or nation.

She is currently working on two research projects.  The first, Moms Mabley: A Cultural Biography, is a book project that examines the life and career of the African American comedian Jackie “Moms” Mabley.  The second, “In a Time Like This”: Jamaican Migrants to the United States, 1940-1964, is an oral history and documentary project that explores the migrations of men and women from Jamaica to the Midwestern United States at the middle of the twentieth century.